You are here: Home / Ayurveda in Sri Lanka

In Sri Lanka ayurveda medicine is based on the country’s centuries old treasure trove of indigenous knowledge base, natural environment and cultural repertory. According to archeological evidence, human civilisation dates back 30,000 years. Cave men of that age domesticated many wild plant varieties and used them for food and medicines.

Sri Lanka’s indigenous medicine has similar origins, linked to the 30,000 year old native habitants of the land known as the Balangoda man (manavaya).

With its ancient history, traditional ayurveda medicine as it is practiced today in the country, is based on an indigenous heritage preserved over 3000 years.

The royal patronage extended throughout history to the nation’s healthcare was supported by the ayurveda practice of the time.

Sri Lankan tradition of indigenous medicine has its own teachings based on outstanding norms and laws. Historical information gathered from chronicles, inscriptions and epigraphic records indicate that the country’s royalty extended their patronage and custodianship to healthcare through traditional medicine. Throughout its course, history shows that traditional medicine has been preserved and practiced to build and maintain the health of the nation. While there is historical evidence of the existence of a national healthcare system, ancient rock inscriptions reveal the existence of a contemporary medical service in the country. These ancient hospital sites, active centuries ago have now turned into tourist attractions, symbolizing the healing and care prevalent at that time. With the royal patronage bestowed on them ayurveda physicians of ancient times enjoyed a noble position in the social hierarchy, endorsing the local belief that, “If you cannot be a king, become a healer”.

This inter-relationship between ayurveda and royalty has placed ayurveda and its connections with Buddhism in the forefront of Sri Lankan life. 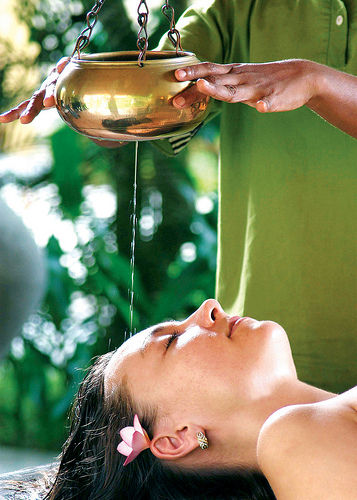 The Ayurveda medical degree BAMS, a six year full time training at Ayurveda institutes affiliated to universities, include the study of modern medical science in addition to the Ayurveda course of medicine.

In ayurveda medical practice the key, most valuable parts of knowledge are often kept within the family and not printed as a document. In ancient times Ayurveda physicians served the community with royal honour. Traditional medicine was handed down the generations through family lineage in an education system called Guru Kula which accommodates skills-based and practice-oriented training. Ancient medical artifacts are another aspect of the heritage of the national treasure of ayurveda medicine.

As a nation, the importance of the preservation of this ancient medical science is reflected in the fact that today, Sri Lanka is the only nation with a cabinet ministry for Indigenous Medicine. The government policy and institutional system inevitably support the island-wide curative and preventive services provided by ayurveda sector. The Ayurveda Medical Council maintains and controls the registration of physicians and code of practice, ethics and conduct. The Department of Ayurveda, headed by a Commissioner, is the regulatory authority for the manufacture of ayurveda medicine. The National Ayurveda Research Institute works out nationally important research projects and solicits private sector partnership to update standards of ayurveda products. Finally, ayurveda has its own unique quality, which encompasses the whole being, treating the disease holistically. It examines the components which construct a particular afflicted person, and the factors which influence its development or regression. Thus, it treats the person, rather than the disease.

We use cookies on our website to give you the most relevant experience by remembering your preferences and repeat visits. By clicking “Accept”, you consent to the use of ALL the cookies.
Cookie settingsACCEPT
Manage consent

This website uses cookies to improve your experience while you navigate through the website. Out of these, the cookies that are categorized as necessary are stored on your browser as they are essential for the working of basic functionalities of the website. We also use third-party cookies that help us analyze and understand how you use this website. These cookies will be stored in your browser only with your consent. You also have the option to opt-out of these cookies. But opting out of some of these cookies may affect your browsing experience.
Necessary Always Enabled

Any cookies that may not be particularly necessary for the website to function and is used specifically to collect user personal data via analytics, ads, other embedded contents are termed as non-necessary cookies. It is mandatory to procure user consent prior to running these cookies on your website.